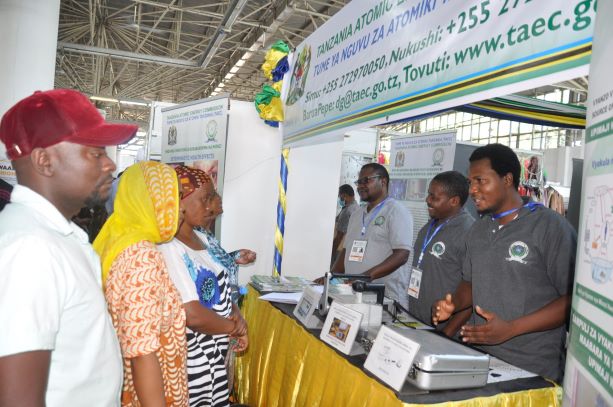 Once again the Tanzania Atomic Energy Commission has actively participated in the 44th International Trade Fair to provide education on the responsibilities of TAEC on radiation control and the promotion of safe use of nuclear technology in the country.

The thirteen days exhibition was officially launched by the Hon. Kassim Majaliwa, Prime Minister of the United Republic of Tanzania on 26 June, 2020, were commenced on July 1, 2020, and has official winded up today, July 13, 2020 by the Hon. Amina Salum Ally, Minister of Industry and Trade from the Revolutionary Government of  Zanzibar.

Throughout the exhibition, a total number of 300 visitors came to the pavilion and learned about the various functions of TAEC on radiation control and the promotion of safe use of nuclear technology in the country. In this exhibition TAEC provided answers to questions asked by the visitors and the business men about the importance and reasons behind the radiation analysis in the product chain material such as illicit trafficking, radiation elements in our environment due to the fact that in many areas of our country is rich with uranium thus leading to radiation analysis in the food chain material.

Visitors were also informed that TAEC was established in accordance with the Atomic Energy Act No. 7, 2003 and was given responsibilities to regulate safe use of radiation order to protect public and the environment from the harmful effects of radiation.

Guests were delighted with the way education has been provided in a variety of ways including short videos, brochures, newsletters, and information from the staff who participated in the exhibition, Mr. Alex Muhulo who is a senior researcher, Mr. Vitus Abel who is a nuclear science researcher and Mr. Peter Ngamilo who is the Senior Public Relations Officer and Head of the Public Relations Unit of the TAEC.

In addition visitors were also informed that the nuclear technology is used in many various sectors country wide such as in health, livestock, agriculture, construction, research and water, so visitors informed that TAEC is the only and legally authorized institution which has the mandate and role to play in ensuring workers, patients, environment and public are protected against the harmful effects of radiation

In finalizing visitors were clued-up that TAEC was in the process of implementing nuclear technology in the storage of food, crops to prolong its use and protect it against possible damage caused by microbes where using this technology would improve industrial products and medical equipment.